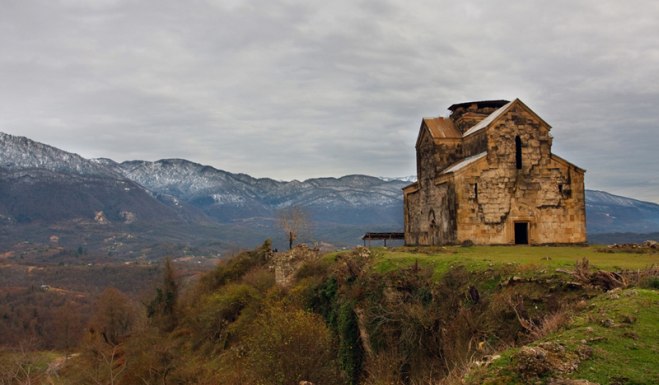 The article by Semen Pegov is a comprehensive response to the charge being laid against Abkhazia by the Georgian authorities with regard to the fate of the fresco in the church at Bedia of King Bagrat II(I), who became the first ruler of the united Kingdom of Abkhazia and Georgia one millennium ago and who lies buried there. For some time, the Georgians have also been complaining about the nature of the renovations carried out to the church at Elyr (Ilori) just outside the town of Ochamchira. In general, the Abkhazians are alleged to be (at best) neglectful of, or (at worst) guilty of disfiguring, monuments of ‘Georgia’s’ cultural heritage in the republic.

These accusations of cultural vandalism have a rather hollow ring. It is now 20 years since Georgia’s State Council (headed by Eduard Shevardnadze), which had unconstitutionally grabbed power in a coup that ousted the democratically elected president, Zviad Gamsakhurdia, sent troops into Abkhazia on 14 August, thereby sparking the 14-month long war that ended in humiliation for Georgia on 30 September 1993, since when Abkhazia has existed as an independent state. One of the many infamous acts committed during that war by the Georgians occurred on the evening of 22 October. The Dmitry Gulia Research Institute for Abkhazian Language, Literature and History, which stood in a prominent spot on Sukhum’s sea-front, housed a priceless library and archive. But that evening it was deliberately set alight. When attempts were made to dowse the flames, gunmen held the fire-fighters at bay. The destruction of this building (along with that of the State Archive, plus the severe damage done to both the museum and public library) must be seen as nothing other than a calculated attempt to erase the documentary evidence of the Abkhazians’ very presence on their ancestral soil. Contrary to the world’s reaction to the devastating destruction of Sarajevo’s Library during the Balkan conflagration, little has been done to help Abkhazia recover its cultural losses; almost the only help in this regard has come from Russia and Turkey.

The Abkhazians are proud of their cultural (specifically christian) heritage and of the monuments standing on their territory that testify to it. As recently as 2010, a beautifully produced book ‘The Sacred Objects of Abkhazia: Orthodox Churches and Monasteries’ (in Russian) was published there. And, of course, when one speaks of the Bedia Church, one thinks not only of the Bagrat fresco but also of the wondrous Bedia Bowl, a gold repoussé chalice dating from 999A.D. in the reign of Bagrat. When the traveller Carla Serena was in the area in 1881, it was evidently kept among the treasures at Elyr (see the image  on p. 390 of her ‘Excursion au Samourzakan et en Abkasie’). For many years it has been exhibited at the Tbilisi State Museum. The Abkhazians would rather like it back (along with other items that are suspected of having been spirited away to Tbilisi during the Georgian occupation of 1992-3)…

Anzor Agumaa: Tbilisi Raised The Issue of the Bedia Church for Political Reasons

Bedia --- Let me remind you that last week Georgia stated that it is preparing an appeal to UNESCO in connection with the destruction in Abkhazia of an ancient fresco of King Bagrat in Bedia church.  Semen Pegov visited Bedia to try to find out what actually happened there, and to what degree this information is correct.

Bedia church is a very ancient Christian monument dating from the 10th century. Historians have established that the cupola collapsed in the 18th century. Attempts were subsequently made to repair it, but the church remains half-ruined. Naturally, this has affected the interior. According to the head of Abkhazia’s board for protecting of historical and cultural heritage, Anzor Agumaa, the ancient frescoes have been gradually destroyed over the past few centuries.

"The Georgian side has raised the issue today purely for political reasons. They are trying to grasp at something in every sphere, and now they have zeroed in on the frescoes.  I am not going to comment on what the Georgia side writes about “occupied territories” and “Georgian monuments” because I don’t want to say anything stupid,” Anzor Agumaa said.

The Georgian side is kicking up a fuss over the destruction of the fresco of King Bagrat on the south wall of the church, and even announced it would appeal to UNESCO. But Abkhaz historians and archaeologists say that argument is absurd for several reasons.

"It is not known when the fresco of King Bagrat II (the Georgians have their own chronology and refer to him as Bagrat III) began to disappear. But we know that traces of it survived into the Soviet era: there is a photo dating from 1938. But with every year that passed, more and more of it flaked away, and it finally disappeared during the 1992-1993 war when the Georgian artillery bombarded the church,” Agumaa said.

Art historian Suram Sakaniya began studying the frescoes in the Bedia church back in the 1970s, when he was still a student. Then, he said, you could still see fragments of the wall-painting, and the figure of King Bagrat was still partially preserved.

It was bad enough that no restoration work was undertaken during the Soviet era, and the fresco simply flaked away. But the most irreversible damage was inflicted by Georgian artillery shelling during the 1992-1993 war that targeted the south wall of the church, where previously you could see the depiction of Bagrat.

“The south wall was so badly hit that the fragments on the south side – they included not just the depiction of Bagrat, but of the Mingrelian King Dadiani and his wife – were seriously damaged. The Georgian artillery scored a direct hit and naturally sizeable pieces of the fresco began to flake away very fast,” Suram Sakania explained.

Aleksandr Chengelia, a veteran of the 1992-1993 war and now a member of parliament, witnessed the events of 20 years ago. The Bedia church is situated on one of the highest points in the surrounding area, and during the fighting, it was practically on the Eastern front line. Aleksandr Chengelia shows us the location of the war-time Georgian positions from which the artillery bombardment was carried out.

"South of the ridge next to the central highway is the Chkhatolskoe plateau, and further along the ridge there were positions in the village of Ishkhyt. A Georgian artillery battalion was deployed all the way to the Chkhatolskoe plateau, and the line of fire included the highest elevation in the region, the site of the church complex, where we are standing," Chengelia said.

Georgian military leaders assumed that the main Abkhaz defence forces were concentrated in the Bedia church, which is why the area was subjected to heavy shelling. But according to Aleksandr Chengelia, the Georgian officers were wrong: the Abkhaz military were not deployed here, precisely because they hoped to protect the church from artillery shells.

"The Eastern Front Command issued orders not to deploy any troops here. Because there was a danger the church would be fired on, our units and positions were further down the hill,” Chengelia explained.

Anzor Agumaa expands on the war veteran’s testimony. "It is outrageous to say today that it was the Abkhaz who destroyed Georgian frescoes. I don’t know why they insist they were Georgian. But I want to say this: after they fired on the church, and 19 artillery shells hit the south wall, right where the fresco was, how can they come out with a statement after that?” Anzor Agumaa asks.

The complete restoration of the Bedia church would entail a huge amount of work, which in turn would require considerable financial resources. For that reason, its restoration in the near future is out of the question. But that does not mean that it has been abandoned. The Save the Bedia Church Fund was established in 2004, and it has already begun to finance repair work to prevent the building deteriorating further. Specialists were invited from Russia to carry out those repairs.

This article was published by Ekho Kavkaza and is translated from Russian.