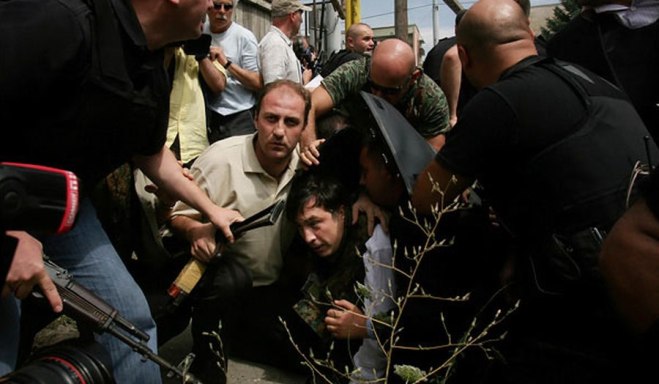 Unpublished documents produced by the European Union commission that investigated the conflict between Georgia and Moscow assign much of the blame to Georgian President Mikhail Saakashvili. But the Kremlin and Ossetian militias are also partly responsible.

From her office on Avenue de la Paix, Swiss diplomat Heidi Tagliavini, 58, looks out onto the botanical gardens in peaceful Geneva. The view offers a welcome respite from the stacks of documents on her desk, which deal exclusively with war and war blame. They contain the responses, from the conflicting parties in the Caucasus region -- Russia, Georgia, South Ossetia and Abkhazia -- to a European Union investigative commission conducting a probe of the cause of the five-day war last August. The documents also include reports on the EU commission's trips to Moscow, the Georgian capital Tbilisi and the capitals of Abkhazia and South Ossetia, dossiers assembled by experts and the transcripts of interviews of diplomats, military officials and civilian victims of the war.

The Caucasus expert, nicknamed "Madame Courage" by the Zurich-based Swiss daily Neue Zürcher Zeitung, is considered a specialist on sensitive diplomatic matters. The Caucasus issue is the most difficult challenge she has faced to date. The final report by the commission she heads must be submitted to the EU Council of Ministers by late July. In the report, Tagliavini is expected to explain how, in August 2008, a long-smoldering regional conflict over the breakaway Georgia province of South Ossetia could suddenly have escalated into a war between Georgia and its much more powerful neighbor, Russia. Who is to blame for the most serious confrontation between East and West since the end of the Cold War?

In addition to having a budget of €1.6 million ($2.2 million) at her disposal, Tagliavini can draw on the expertise of two deputies, 10 specialists, military officials, political scientists, historians and international law experts.

Much hinges on the conclusions her commission will reach. Is Georgia, a former Soviet republic, a serious candidate for membership in NATO, or is the country in the hands of a reckless gambler? Did the Russian leadership simply defend South Ossetia, an ally seeking independence from Georgia, against a Georgian attack? Or did Russia spark a global crisis when its troops occupied parts of Georgia for a short period of time?

The confidential investigative commission documents, which SPIEGEL has obtained, show that the task of assigning blame for the conflict has been as much of a challenge for the commission members as it has for the international community. However, a majority of members tend to arrive at the assessment that Georgian President Mikhail Saakashvili started the war by attacking South Ossetia on August 7, 2008. The facts assembled on Tagliavini's desk refute Saakashvili's claim that his country became the innocent victim of "Russian aggression" on that day.

In summarizing the military fiasco, commission member Christopher Langton, a retired British Army colonel, claims: "Georgia's dream is shattered, but the country can only blame itself for that."

Another commission member, Bruno Coppieter, a political scientist from Brussels, even speculates whether the Georgian government may have had outside help in its endeavor. "The support of Saakashvili by the West, especially military support," Coppieter writes, "inadvertently promoted Georgia's collision course."

Berlin journalist Jörg Himmelreich, who is also a member of the German Marshall Fund of the United States, disagrees. He advocates Georgia's acceptance into NATO and condones the "brief Georgian occupation of the South Ossetia capital Tskhinvali" with the argument that Georgian President Saakashvili faced "great pressure from within his own population to produce results," and to deliver on a promise he had made several times to achieve "reunification" with the separatist republic.

Himmelreich sharply condemns Russia's actions as "aggression" and a "violation of international law." Commission member Otto Luchterhandt, a Hamburg international law expert, reaches a more differentiated assessment. He argues that because the Georgians attacked a base used by Russian peacekeeping forces in the South Ossetian provincial capital Tskhinvali, Russia can invoke the right of self-defense under Article 51 of the United Nations Charter.

The Russian troops were stationed in South Ossetia as a result of a 1992 agreement, binding under international law, between Russia and Georgia. Georgia's attack, Luchterhandt argues, constitutes a breach of this agreement, thereby giving Russia the right to intervene. Nevertheless, he writes, the Kremlin, with its overwhelming intervention in western Georgia, can be accused of "violating the principle of proportionality."

The experts found no evidence to support claims by the Georgian president, which he also mentioned in an interview with SPIEGEL, that a Russian column of 150 tanks had advanced into South Ossetia on the evening of Aug. 7. According to the commission's findings, the Russian army didn't enter South Ossetia until August 8.

Commission members note, on the other hand, that Saakashvili had already amassed 12,000 troops and 75 tanks on the border with South Ossetia on the morning of Aug. 7. In their research, they uncovered remarks by the Georgian president that demonstrate that he had long flirted with a military solution to the South Ossetian problem. "If you ask any Georgian soldier why he is serving in the armed forces, each of them will respond: 'To reestablish Georgia's territorial integrity,'" Saakashvili said in a television address on May 25, 2004.

Senior officials at the German Foreign Ministry in Berlin know that then German Ambassador Uwe Schramm warned in his reports of Saakashvili's penchant towards war. Schramm is now Tagliavini's deputy on the investigative commission.

When the five-day war began, Georgian General Mamuka Kurashvili said on television that his country would "reestablish constitutional order in the entire region." He may have been quoting from Georgian order No. 2, dated August 7. To date, the Georgians have not submitted a copy of this key document to the commission as requested, nor have they turned over copies of other official orders. The commission interprets these omissions as a sort of admission of guilt.

The commission members generally agree, however, that the Georgians and Russians alike violated the provision in the Geneva Convention for the Protection of Civilian Persons in Time of War. Both armies, for example, used cluster bombs, which distribute explosives over a wide area, killing several civilians and wounding many more. Georgia admits to having used the weapons, while Russia denies the charges.

The commission also cited many serious attacks on Georgian civilians by South Ossetia militias. According to a report for the commission by Swiss legal expert Théo Boutruche, militia members, most of them young men, looted and burned down several villages inhabited by Georgians, beat civilians and murdered more than a dozen Georgians. According to the Hague Convention on Land Warfare, the Russian occupying force was obligated to reestablish public order. But it did almost nothing to prevent the atrocities, which a commission dossier classifies as "war crimes."

It is now up to the Swiss head of the commission to prepare the final version of the report, and there are no plans to include dissenting opinions. However, Tagliavini has a reputation for avoiding harsh judgments against any party to a conflict. Commission members predict that she will likely integrate Himmelreich's position into the final report, keeping the door open for Georgia to join the Western defense alliance, despite its hot-headed president. In early June, Saakashvili boasted that his country was still at war with its Russian "enemy."

Another question will likely remain unanswered: What role did the United States, the sole remaining superpower, play in the Georgian conflict? For years, the government of former President George W. Bush provided Georgia with extensive military aid, which included sending about 150 military trainers to the country.

Nevertheless, a number of commission members are curious to know what John Tefft, the US ambassador in Tbilisi and a former advisor at the National War College in Washington, knew about Saakashvili's marching orders. One question they would like to ask is why no one at the US State Department took a call from Russian Deputy Foreign Minister Grigory Karasin when the war broke out in the early morning hours of August 8 -- when it was afternoon in Washington.

Other commission members would be interested in talking to Daniel Fried, the assistant secretary of state responsible for Georgia at the time. Fried recently told a German foreign policy expert privately that Saakashvili "went out of control" in August.

But Tagliavini's team won't be questioning any Americans. According to one member of the commission, "our director and the EU apparently lack the courage" to take that step.