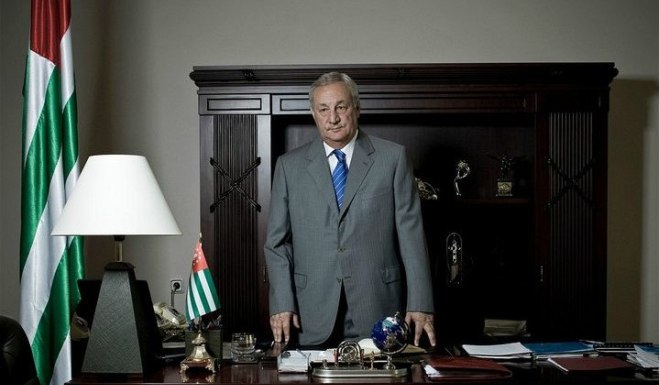 Sergei Bagapsh was the second president of the Republic of Abkhazia

Sergei Bagapsh was the second president of the Republic of Abkhazia, the region of Georgia that broke away in 1993. He played a crucial role in guiding the country through troubled years.

Bagapsh was born in Abkhazia's capital, Sukhum, in 1949. He trained as an agronomist but after military service made his career in the structure of the Soviet Communist Party, serving in various capacities during most of the 1970s in the youth organisation Komsomol. He was First Secretary of the Ochamchira district from 1982 to 1989, which year saw critical developments in Abkhaz-Georgian relations, leading to Abkhazia's long-desired secession from Georgia in the wake of the bitter war of 1992-93.

In the build-up to war and during the difficult decade of the 1990s Bagapsh held various administrative offices under the leadership, and eventual presidency, of Vladislav Ardzinba. Ardzinba saw out his second term, but ill-health forced him to withdraw, allowing the one-time KGB operative Raoul Khadzhimba to take over.

Bagapsh, however, with the support of the Amtsakhara [Kinship Military Group] and Apsny Ak'zaara [United Abkhazia], stood against him in the presidential elections of 2004. Though the Kremlin-favoured Khadzhimba was initially declared the winner, the Supreme Court overturned the results. The consequent stand-off was resolved when the two opponents declared a readiness to put themselves before the electorate on a joint ticket for a re-run in January 2005. Bagapsh duly became president and Khadzhimba vice-president, the two forming an uneasy partnership with a strict division of competences. But the results of the next election, in 2009, were unchallengeable, and Bagapsh was returned to a second term.

Endowed with a different kind of charisma from that of his predecessor, Bagapsh conducted himself with quiet dignity and modesty. He was prepared patiently to keep restating the case for Abkhazia's independence from Georgia in his meetings with visiting politicians, diplomats and journalists, in the full knowledge, based on personal experience in 1989 and 1992-93, of what any compromise would mean for the fate of his small nation. Though willing to negotiate with Tbilisi and a promoter of good neighbourly relations, he broke off talks in 2006 after the Georgian president illegally introduced militia into Abkhazia's Upper K'odor Valley. Though in the spring of 2008 Abkhazia feared being the target of renewed Georgian aggression, it was South Ossetia which suffered. When Russia came to South Ossetia's aid, Bagapsh grasped the opportunity to retake the K'odor Valley, which had remained under Georgian control since 1993, and managed to do so without a battle. The crowning glory of Bagapsh's presidency came on 26 August 2008, when Russian president Dmitrij Medvedev formally recognised Abkhazia (and South Ossetia).

Bagapsh was married to a Mingrelian – outside Abkhazia, Mingrelians (and Svans) are generally described as Georgians – and this connection was widely seen as boosting his support among Mingrelians eligible to vote in Abkhazia's 2004-05 elections.

It has been argued that it was to counter any suspicion of excessive sympathy for the Mingrelians that he proved too accommodating to Russian interests. Bagapsh himself, however, maintained that the concessionary leases to allow Russia to provide security along the border with Georgia and to upgrade the railway and Sukhum's airport, were entirely practical, as Abkhazia itself did not have the wherewithal to undertake these tasks, and he could thus concentrate on rebuilding the war-damaged infrastructure and health-service. Given the US's and EU's continuing support of Georgia's determination, however unrealistic, to re-establish its Soviet borders, it is difficult to see how any Abkhazian president could have acted (or, indeed, act) differently.

Shortly before his death, Bagapsh was able to visit for the first time the Abkhazian diaspora in Turkey, with which country Abkhazians have high hopes of establishing relations. Nicaragua, Venezuela and the Pacific state of Nauru followed Russia in recognising Abkhazia's independence. As Bagapsh lay unconscious, the diplomatic efforts of his administration were about to pay dividends, for on 31 May it was announced that another UN member-state, Vanuatu, had been added to the list, convinced of the validity of the proposition that, at the time Georgia won its own recognition after the collapse of the USSR, Abkhazia had no legal ties to it.