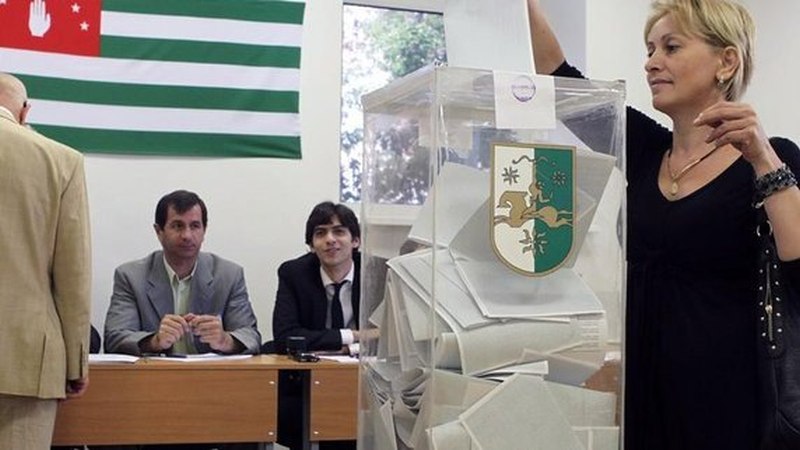 Abkhazia has started preparing for the main political event of 2009 – the presidential elections. November 2 was the deadline to nominate candidates for the main governmental post of this partially-recognized republic. The upcoming elections are the fourth following the Georgian-Abkhazian armed conflict of the early 1990s, and each of the previous campaigns corresponded to particular stages in the internal evolution of the republic’s de-facto statehood. But this time, there is one fundamental difference.

The “magnificent five” of the candidates is made up of Sergey Bagapsh, Raul Hadzhimba, Beslan Butba, Valery Bganba and Zaur Ardzinba. Sergey Bagapsh is the sitting president of the republic, nominated by the ruling United Abkhazia party. Raul Hadzhimba currently holds the reputation of the “chief oppositionist” (he was the representative of the Abkhaz opposition whom the Russian Prime Minister Vladimir Putin met during his August trip to Sukhumi). At the same time, this candidate has extensive experience with being in power. At different times in the past, Hadzhimba served as the vice president, the prime minister of the republic, and five years ago he posed as the successor to the first Abkhazian leader Vladislav Ardzinba, but failed to get appointed to the highest post. Today, Hadzhimba is trying to have a rematch with the 2004 campaign winner Sergei Bagapsh.

Beslan Butba is the leader of the oppositionist Abkhazian Economic Development Party. He has experience working as a deputy (he was a deputy in Abkhazia’s previous parliament, but lost his seat in the 2007 elections), and is considered to be one of the richest people in the republic. He is presently criticizing the government’s socio-economic policy, offering his own view on how to “set up Abkhazia” (as part of his campaign strategy, he presented his own five-year program for the republic’s socio-economic development). Yakub Lakoba, a participant of the 2004 election campaign and the leader of the People’s Party, the oldest in the republic, also supports Butba’s candidacy.

It is difficult to say anything definite about Valery Bganba, besides the fact that he is a doctor of philosophy and economics who is “temporarily unemployed.” Zaur Ardzinba is the irreplaceable director of the state-owned Abkhazian Sea Shipping Company.

Candidates have until November 12 to register, after which they can start campaigning. The official list of candidates is displayed for everyone to see ten days before the election (it is scheduled for December 12). The people’s will must be announced within three days of the election (that is, before December 15).

The first presidential elections held here in 1994 marked a transition from the traditional model of the national and autonomous formations during the Soviet times to a presidential republic. Back then, Abkhazia’s leader was chosen by the deputies of the republic’s Supreme Soviet. In 1999, the elections were held nationwide for the first time, but they were non-alternative: the only candidate was the charismatic leader of the Abkhaz nationalist movement, Vladislav Ardzinba. But his grave illness that followed predetermined the outcome of the struggle for his political heritage. The period of the republic’s first president’s supreme and undivided reign spurred a powerful tendency toward the softening of the personal power regime and liberalization in Abkhazia.

The 2004 elections were marked by tough competition. Five years ago, Abkhazia’s current President Sergei Bagapsh systematically spoke out against authoritarian rule. In 2009, his critics claim that the “stagnant character” of his rule is their main bone to pick with him. That is to say, the republic’s second president has done nothing to drastically change the situation in Abkhazia, leaving things just as they were when he took over.

It seems that there is a great dose of truth in the critics’ words, especially since the Abkhaz leader certainly doesn’t like to make sudden moves and has no proclivity for revolutionary transformations of reality. However, one big, obvious advantage can be said to have come out of the Bagapsh presidency, and this is a very rare achievement for the whole of the former Soviet Union. Having come to power, Bagapsh did not take to destroying the opposition and establishing his legitimacy by rejecting his predecessor. There is still an opposition media in the republic, while seven of the 35 deputies in parliament are members of the opposition (during the parliamentary elections of 2007, nearly half of the 35 single-seat constituencies held second rounds). Thus revenge (which would have been understandable from a human point of view, considering how much nasty rhetoric was directed at the oppositionist candidate Sergey Bagapsh in 2004), did not become the driving force of the second Abkhazian president’s political behavior. The fact that it is not just the opposition that is contesting this year’s elections, but the main opponent of the 2004 campaign Raul Hadzhimba, speaks in Bagapsh’s favor. At the same time, it should be noted that Hadzhimba today largely repeats Bagapsh’s calls and slogans of five years ago, criticizing the authorities for being distanced from society and the needs of the ordinary people.

Meanwhile, the upcoming presidential elections in Abkhazia are actually drastically different from all of the previous campaigns. They are noteworthy because they will be the first since the process of acknowledging the republic’s independence began. It will be a test of the partially-acknowledged state’s maturity. The voting in December will only be open to Abkhazian passport holders. Batal Kobakhiya, the head of the deputies’ commission on preparing suggestions to correct the republic’s electoral legislation, believes that this will prevent mass rigging. But from Russia’s point of view, an Abkhazian passport is not just a procedural instrument and insurance against forgery, it is an identifying factor (Abkhazian citizenship as the foundation for building the state). Such legislative novelty as the requirement for all presidential candidates to open a checking account with financial organizations that are registered on the republic’s territory (and not in the neighboring Krasnodar region of the Russian Federation) should also be viewed in this “identification” context.

Because all of the candidates to the presidential post are Russia sympathizers, their differences relate to the quality of the Abkhaz statesmanship and independence. Having been recognized by Russia in August of last year, Abkhazia reached a very important milestone. Dealing with Georgian calls for “reinstating territorial integrity” are no longer a relevant political task for the Abkhaz elites. Now their main goal is to endow independence with positive content and a higher quality. After all, it was not to replace one patron with another that a battle with the “small empire” was waged in the 1990s.

Thus Moscow ought to grasp what looks to be a very simple truth at first glance: the farther Abkhazia gets from Tbilisi, the more questions and critical remarks will be addressed to the present-day sponsor of Abkhazia’s self-determination – the Russian Federation. This poses a very important question for Russian politics: did Russia learn a lesson from the campaign of five years ago, when unilateral support for the approved successor on behalf of the Kremlin provoked what looked like unfounded Russian-Abkhaz disputes? In August of this year, Vladimir Putin broke the Kremlin’s long-term, unspoken tradition on the post-Soviet space—he met with representatives of the Abkhaz opposition. This is possibly a sign of new trends and a change in Russia’s approach to formulating policy in the “near abroad.” In any case, in this situation it is very important to understand that in August of 2008 Moscow did not settle all of the issues in the republic, but acquired a new set of complex problems and obligations.

Sergey Markedonov is an independent political analyst and expert on the Caucasus.