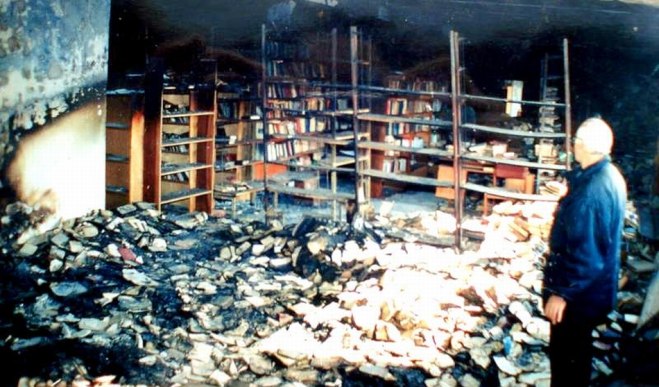 An archivist reflects on the destruction a decade ago of a priceless record of Abkhazia's cosmopolitan past.

By Thomas de Waal in Sukhum(i) (CRS No. 122, 28-Mar-02)
In an echoing corridor bundles of yellowing papers, tied together with string, were piled waist-high. The head of Abkhazia's archive stooped down and eased a document, a bill from the 1930s, out of one of the packages. "It's just like rubbish," he said. "What can we do with it?"
Nikolai Ioannidi knows it is not rubbish - he has worked in Abkhazia's archive for 36 years. What distresses him is that these bundles are all that remains of the republic's archive, destroyed in 1992 in the greatest cultural tragedy of the Georgia-Abkhazia war.

Uncatalogued, prone to damp, heaped together in an empty wing of Sukhumi's university, these documents are the remnants of an archive, which its head does not know how to revive. "No one else, who works here has higher education," he said last month, sipping a cup of Greek coffee in his chilly office. The archivist's only catalogue was also burned in the conflagration, there is no money in this impoverished breakaway state to spend on restoration and contact with the outside world is minimal.

Tall, with pale skin and thoughtful blue eyes, Ioannidi is a dispassionate observer on the catastrophes that have visited the Black Sea region over the last two generations. He has watched as the twin pillars of his life - the archive and the Greek community of Abkhazia which he comes from - have all but disappeared.

When I first met the archivist in May 1992, he was working on several books, including a catalogue of his archive, a record of the place-names of Abkhazia and the history of its old Pontic Greek community. Three months later Georgian forces took over Sukhumi and war broke out. Then came the inferno of October 22.

"At eight in the evening my neighbour rang and said the archive was on fire," Ioannidi said. "Because of the curfew I couldn't get there until morning and by then nothing was left."

Later, Ioannidi managed to work out what had happened. At around 4.30 pm that day, he said, a car with five or six young Georgians wearing black uniforms drew up outside the archive. They broke down the door of the building, went in and set it ablaze.

Neighbours of all nationalities, including Georgians, rushed out in the street and put the fire out. However, the armed men returned forty minutes later. This time they drove away the neighbours with shots, ringed the building, poured kerosene over it and set it on fire again. A fire engine, which came to put out the blaze, was not let through.

"In the morning there were just remnants," said Ioannidi. The collection had been 95 per cent destroyed. Nothing from before the revolution - the archive dated back to 1840 - was left and the only section that survived more or less intact was the radio archive from the 1930s.

Ioannidi also lost all his own manuscripts. "I came into my office, opened the safe and for just a moment, I was overjoyed because I saw that everything was still in place," he said. "Then I watched as it all turned to ashes before my eyes, from the heat."

Yet more destruction followed. Abkhazia's Communist Party archive, which was kept in a different building, was partly wrecked by Georgian troops billeted there. The remainder was moved into Sukhumi's Government House - and then ruined, when the Abkhazians stormed and captured the city from the Georgians in 1993.

Ioannidi estimated that of 176,000 archival documents in Abkhazia, before the war, 168,000 had been destroyed.

In addition to waging war over land, both sides in the Georgia-Abkhazia conflict have sought to diminish the historical claims of the other to disputed territory. The leaders of the Abkhazian separatist movement, such as the current head of the self-proclaimed republic Vladislav Ardzinba and his foreign affairs spokesman Sergei Shamba, were historians.

One side-effect of the 1992-3 war was that both sides attacked the cultural artefacts of the other. The Abkhazians destroyed a statue of the medieval Georgian poet Shota Rustaveli and have erased all Georgian cultural references from Sukhumi.

The biggest act of cultural vandalism was undoubtedly the destruction of Abkhazia's archive. It seems to have been a deliberate attempt by the Georgian paramilitary soldiers to wipe out the region's historical record.

The irony is that the soldiers actually burned the documentary history of what was one of the most cosmopolitan parts of the Black Sea area.

Amongst the ashes, for example, are all Abkhazia's turn-of-the-century Greek newspapers, from the time when Sukhumi was a thriving port with a large Greek population.

This is the milieu Ioannidi comes from. His family's former two-storey house still stands in the centre of the city. Greeks once comprised nearly half of Sukhumi's population. Then in 1949, when there were around 40,000 of them, the community was deported by Stalin to Central Asia. When Khrushchev came to power and rehabilitated the Soviet Union's "punished peoples" in the 1950s, only about a quarter came back.

Ioannidi himself escaped deportation because of his German mother, but he remembers how the city of his childhood suddenly emptied overnight. He believes that the sudden loss of many of the republic's most educated citizens was fatal for the region and later on helped polarize the Georgian-Abkhazian quarrels which led to war in 1992. "If there had not been 1949, the whole situation in Abkhazia would have been different," said Ioannidi. "If there had been a neutral force in the middle, war would not have been so possible."

In the middle of the conflict, the Athens government sent a ship to Sukhumi in what became known as "Operation Golden Fleece". More than a thousand Abkhazian Greeks, who had divided loyalties between the warring sides in the conflict, were evacuated to Greece.

The Abkhazian population was around half a million in 1992, but has been reduced to perhaps 200,000 now. All the Georgians have gone, as have most of the Russians and Ukrainians. As for the Greeks, there are probably less than two thousand left, most of them elderly.
"The problem of the Greeks of Abkhazia has almost been resolved because soon there will be almost no one left," said Ioannidi, pronouncing a death sentence on this cosmopolitan chapter of Abkhazia's history.