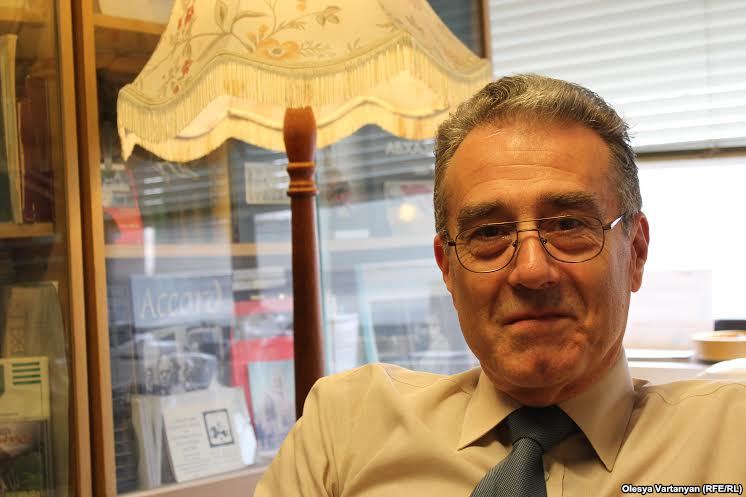 George Hewitt is professor of Caucasian languages at the School of Oriental and African Studies (SOAS) and a fellow of the British Academy.

LONDON -- George Hewitt - British professor and expert on the Caucasus at the School of Oriental and African Studies, University of London. From the mid-1970s, he regularly travelled to Georgia for research. Hewitt was a welcome guest in Tbilisi until his ‘Open Letter to the Georgian People’ was written in May and published in Tbilisi in July 1989.

Olesya Vartanyan: Exactly 25 years ago you published an open letter to the Georgian people. It caused a scandal, and you eventually were deprived of all ties with Tbilisi. Over the past quarter of a century have you ever regretted that you made that statement?

George Hewitt: No, I do not regret it , because at that moment I thought I could make a contribution to the preservation of peace between Abkhazians and Georgians. I believed then, and continue to believe to this day, that any objectively minded person, having read my letter, would realise that it was written for the benefit of both peoples. If I had not published it, and then the 1992-93 war happened, I would not have been able to live with my conscience, knowing that I made no effort to stop the slide toward chaos. Ultimately, the war did happen, but there’s nothing to be done about it now.

Olesya Vartanyan: But you're a scholar. I read, for example, about how you have been spending a lot of time travelling to distant villages in Turkey only to find at least some traces of Ubykh. I say this, because I think that for you it was very important to have access to Georgia. You lost it, but could it be otherwise...

George Hewitt: Yes, it is true, of course. You know, I once thought that my major work on Georgian grammar would be written in my mid-50s. But after the publication of my Open Letter, it became clear that I would no longer be in contact with the Georgians or with Georgia. At that very moment I was contacted by two publishers with a request that I produce a self-tutor as well as a reference grammar for Georgian. And so, I did this — the self-tutor was published by Routledge and the reference grammar by John Benjamin. This happened sooner than I had imagined — when I was a little more than 40. So, you see, I gained 10 years, and I still had time to study other Caucasian languages.

Olesya Vartanyan: So you never experienced a moment of regret ? At least once...

George Hewitt: Of course it would be nice to go back (to Georgia ) and get the opportunity to reconnect with Svaneti(a), which I think is the most beautiful place which I have ever visited. But I must confess that I have come to terms with the fact that I shall never see this part of the world again.

Olesya Vartanyan: I have read your Open Letter. In it you talked about the pressures being exerted on the population of Abkhazia during the Soviet years, and called for a stop to the growing nationalist sentiment at that time in Georgia. But at the same time you said that "Any Abkhazian wishing to secede from Georgia needs his head examining." You know, it sounds unusual in today's environment.

George Hewitt: It's remarkable that you have picked out this particular phrase which I did actually employ in my talk in London (May 1989) which was the basis for my Letter. At that time I was thinking of attempts by Abkhazians to have Abkhazia removed from Georgian control and transfer it into the orbit of the Kremlin. Widely known was the case where 130 representatives of Abkhazia’s intelligentsia wrote a letter with such a request to the Kremlin, after which they all lost their jobs. This was the situation at the time when I wrote the Letter. What I was trying to do was to make clear that any mention of an intention to secede from Georgia would be something of a red rag to a (Georgian) bull. Everyone understood what the reaction would be.

That you picked up this expression is also interesting for another reason. In August 1989, I went on Abkhazian television to answer the violent reaction that followed the publication of my Letter. This was the only time that Georgian was heard on Akhazian TV, and the next day my statement was rebroadcast on Georgia’s main evening news-programme Moambe. Following my interview, a statement was made by someone who is no longer alive, but who in fact had been my best man when I married in 1976 in Georgia. He too homed in on this expression, which he translated into Russian as "Any Abkhazian who seeks secession from Georgia should have his  brains checked by a psychiatrist." This translation of a familiar English idiom sounds much stronger than its force in the original.

Olesya Vartanyan: And what did you mean really?

George Hewitt: In English the expression means that a person who behaves in a certain way is ‘crazy’ (because of the consequences likely to follow). It is, of course, not a technical expression...

Olesya Vartanyan: So you did not want to say that the Abkhazians should not have thought about independence?

George Hewitt: I would say that it was very risky to make such statements, to take steps in the direction of separation, knowing what a furious reaction would probably come from the Georgians. The translation of my words seemed to me to be a lot cruder than what I really wanted to say, which would have been clear to anyone with a proper knowledge of the English language.

Olesya Vartanyan: Okay, let's get back to our time. During my trips to Abkhazia, there were people who spoke strongly against any contact with the Georgians, including formal negotiations, as long as Georgia does not recognise the independence of Abkhazia. What do you think about this?

George Hewitt: You're right. There are such people, and we can understand why they say this. But you 've probably heard about the international non-governmental organisations which since the mid 90s have been helping joint Georgian-Abkhazian civil-society representatives to visit Western countries and meet people from foreign governments. The Georgians and Abkhazians are able to communicate well when they are in Western countries, and one might even say that, on a personal basis, they become friends. In my opinion, it is important that such negotiations take place at this level. But, of course, the ideal situation would be if Georgia were to recognise the independence of Abkhazia, accept the fact that Abkhazia is lost, and proceed to establish good-neighbourly relations. This would be of benefit to ALL.

Olesya Vartanyan: And as you look at the situation of the residents of the Gal District? You've probably heard of the question of issuing them with passports (so-called ‘passportisation’), which has been raging for almost a year, becoming a kind of indication that Abkhazian politicians are failing to accept the Gal residents. What would you say about this?

George Hewitt: It's a very, very difficult question. And part of it is the question of (self-)identity. Abkhazians do not regard Mingrelians as Georgians and would like to see them as a non- hostile nation, whilst Georgians say they are Georgians. Community-leaders in Gal also, it seems, prefer to be called ‘Georgians’, which hardly serves their interests inside Abkhazia, as they are openly identifying themselves with the enemy. And the issue of passports is only one component of the huge problems of this region. During my trip to Gal in autumn last year, in response to my question: "What do you [Gal Mingrelians] want? ", one local resident said: "We want to be treated as equals to citizens." One can understand why a resident of Gal should say this. Over the past 20 years, the Abkhazian side has not done enough to (as I call them) the Kartvelian population of Abkhazia to make them feel a respected part of Abkhazian society, worthy citizens of Abkhazia. But the people there largely hold Georgian passports, which Abkhazians neither have nor want. And so, how can ‘equality of citizenship’ be created? As long as Georgia does not recognise Abkhazia, I see these problems persisting — sadly.

Olesya Vartanyan’s trip to London was organised by the Observer Mission of the European Union, which has adopted our correspondent in its prize for 'peace-journalism".