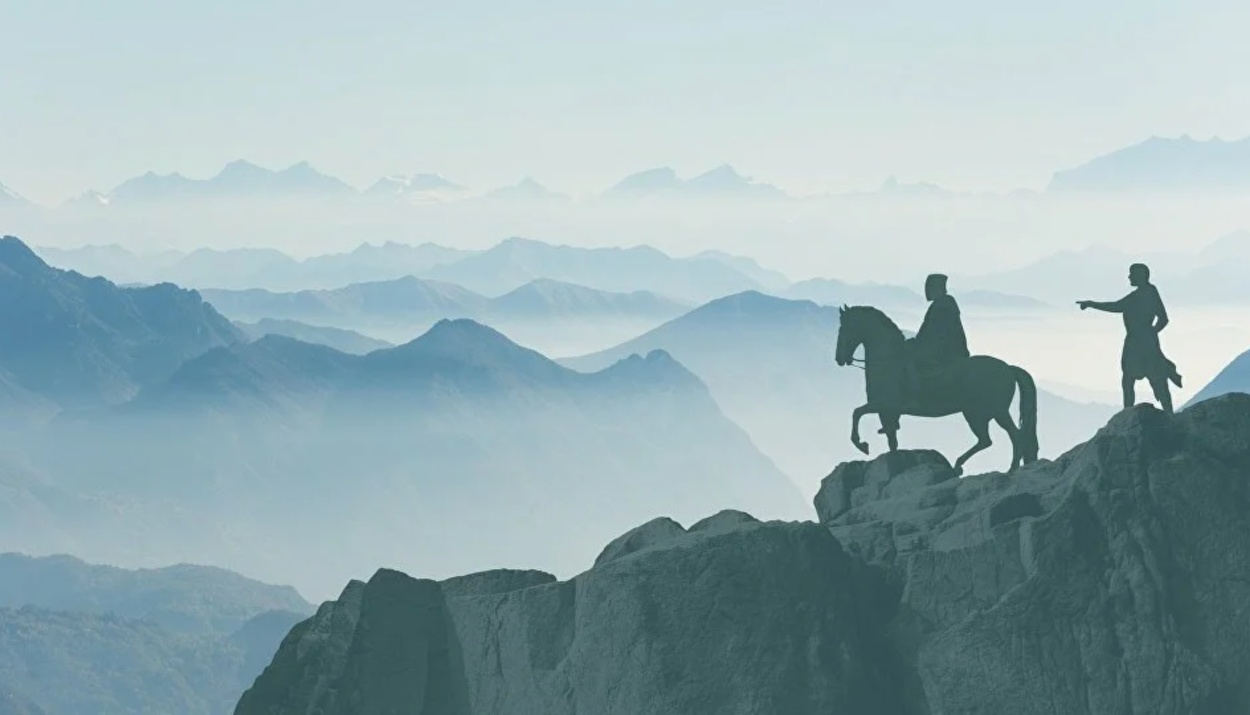 I understand those who do not believe the scholars who write history, and are skeptical about it as a scholarly discipline, which in large measure is more anti-scholarly. This happens because if today someone wrote a story somewhere, then tomorrow he, or other people, due to various circumstances, will rewrite this history, editing its important parts. Hence, it turns out that every nation has a history proportionate to the extent of its imagination.

But the history of history is different. If the history of Georgia is cobbled together from materials belonging to the history of other peoples of the Caucasus, and Georgian scholars, without shame and conscience, falsify the history and culture of the Caucasian peoples, then the history of Abkhazia is not falsified by Abkhaz scholars but is subject to the falsifications from the Georgian side. As a result, Georgia deprives the Abkhazians of the entirety of their history, with the exception of a time-period equal to the last three hundred years, starting from the 17th century.

We are deprived of our historical homeland. We are declared aliens on our own territory. Having defined the ancestors of our people as "Apsuians", we are forbidden to consider the Apsils, a tribe sharing the same roots as the Apsuians, as our ancestors. We are ripped away from the history of the Apsars, from whose language, in accordance with the mediaeval Georgian annals, is translated the name Lasha, given to King Giorgi IV, son of Queen Tamara and the Ossetian prince David Soslan. But at the same time, none of the Georgian historians who support the anti-scholarly theory of Pavle Ingoroqva are embarrassed by the fact that the name Lasha, given to Giorgi IV at his birth in 1191 (in the 12th century), is translated from the modern Abkhaz language and means "light", "luminary" ...

In support of our words, we cite examples from the dictionary of the Abkhaz language, published in Sukhum in 2005 (compiled by Professor, Doctor of Philology, Vladimir Arushanovich Kaslandzia): ala (eye, eye), alabara (vision), alagw (eyeball), alaghyrdz (tear), alaz (bright-eyed: there is no such word in the dictionary, but it exists in the Abkhaz language, which the author of these lines has repeatedly heard from Professor, Doctor of Historical Sciences, Grigory Vakhaidovich Smyr), alak’ta глаз (eye socket) , alakyts’a (under the eye), alapSH (look), alakht’yra (culture, civilization: literally "opening the eye"), alaSHa (light), alaSHara (light, culture, civilization, dear, dear, shine, dawn), alaSHarbaga (luminary), alaSHarbagassa (stars: in the Abkhaz hunting language), alaSHark’y (light,bright), etc.

However, what is most disturbing, the case of complete discrepancy between the above facts and the anti-scholarly theory invented by Pavle Ingoroqva for some reason does not bother Georgian historians. In fact, the author of these lines perfectly understands what drives Georgian historians and what they fear.

With all this history the Georgian intelligentsia had to do something urgently. And instead of (to the envy of all the peoples of the world) cementing relations with the Abkhazians, ethnically non-Georgian people but eternally fraternal, its representatives decided to go for broke. They invented a significant, proportionately overwhelming, part of their own history. Abkhazians were denied autochthonism and the right to be called “Abkhazian”. They subjected the entire history of ancient and mediaeval Abkhazia, the history of the Abkhazian Kingdom and Church, to Georgianisation.

The daughter of George II was Gurandukht, the sister of three monarchs who followed George II, namely Leon III, Demetrius III and Theodosius III, the wife of Gurgen Bagrationi, ruler of Tao-Klarjeti, who came from the Armenian Bagratid (Bagratuni) family, and who, in turn, descended from one noble Jew. Leon III ruled the Abkhazian  Kingdom from 957 to 967. He was succeeded on the throne by his brother Demetrius III, who ruled from 967 to 975.

The loyalty of the nobles to the Abkhazian crown, says Wikipedia, was far from stable. The noble group gathered and turned to the younger brother of Leon III, Theodosius, who lived in exile in Byzantium, to assert their rights to the throne. The impostor and his followers were quickly defeated by the king.

Theodosius first took refuge in Kartli with a certain Adarnas, as we read on Wikipedia, then with David III, where he stayed for some time, and finally moved to the court of the Kakhetian prince Kvirike II. Demetrius III managed to convince Theodosius to facilitate a reconciliation, and the latter agreed to return to Abkhazia with guarantees of personal safety, confirmed by oaths to the Catholicos and the clergy. The central government was still strong enough to deal with local separatism, but not to overcome the growing structural crisis. The weakness of the government caused another act of brutality. Demetrius caught his brother Theodosius in a conspiracy and blinded him. This act serves to provoke the indignation of his subjects.

In 975, Leon III dies childless, and Theodosius, who ruled from 975 to 978, becomes the sole heir to the throne of Abkhazia. In 978, through the efforts of Ioanne Marushisdze (originating from the princely Marshan family of the Abkhazians), the weak reigning Theodosius III, brother of Gurandukht, was deposed, and the adult Bagrat was proclaimed king of Abkhazia.

Of course, the palace-coups significantly reduced the strength and power of the Abkhazian crown. The childlessness of the kings also did not strengthen the foundations of the famous monarchy. Of course, it's a pity that everything happened this way. This bitter lesson must be learned by all modern and future generations of Abkhazians, so that no further misfortune will happen to the Abkhazian state. But then nothing fatal happened, for the new king of the Abkhazian Kingdom was the fully-fledged and half-blood grandson of the Abkhazian King Giorgi II.

But, if the fact that Bagrat's father was indeed Gurgen Bagrationi, ruler of Tao-Klarjeti, could alter the status of the Abkhazian Kingdom and turn it into a Georgian one, then why in that case, after the accession (conditionally) of the son of Queen Tamara and Ossetian prince David Soslan was the Georgian Kingdom not turned into an Ossetian one? By the way, David Soslan had greater claims to being Ossetian than Gurgen Bagrationi did to be a Georgian. Why, if everything is determined by the origin of the reigning individuals, did not the Russian Empire in 1725, when Catherine I (Martha Skavronskaya) ascended the throne, turn into a Polish or Lithuanian one, or in 1762, when Catherine II  (Sofia Augusta Frederica Anhalt- Zerbst) ascended the throne, did it not turn into a German one? Or why did not Iran turn into Azerbaijan in 1796 after the founder of the Turkic (Azerbaijani) Qajar dynasty became the Shahinshah of Iran?

Addressing as colleagues Georgian historians and public figures, I want to ask you: how can Abkhazians believe in the peace-making of Georgia and Georgians when you are trying to take away from us the holy of holies, namely the history of our one and only Motherland in this world, when you call us aliens on our own land, when you do not admit your guilt before the Abkhazian people and all the inhabitants of Abkhazia for the genocide committed during the 1992-1993 Georgian-Abkhaz war, when you contribute to the strengthening of the economic blockade and international political isolation of Abkhazia, and, finally, when, seeing the defeat of Armenia in Nagorno-Karabakh, you rejoiced and turned to God, thanking him for a new chance to return Abkhazia to the bosom of Georgia through violence? I remember very well from your numerous comments on social networks how bitterly you regretted that the war between Azerbaijan and Armenia was stopped by the wilful decision of the Russian Federation, whose peacekeeping units were brought into the conflict-zone, which saved the Nagorno-Karabakh Republic from complete liquidation.

If you want the honest truth, knowing you, I can hardly believe any of your books on the history of Georgia. Your entire history needs to be rewritten anew, because you have edited, changed, polished, plastered and sanded it with your endless falsifications to such an extent that now there is no point in trying to familiarise oneself with it.

Excuse me, but it's actually scary to live the way you live, as in a looking glass, in the fog, in the darkness of your own arrogance. Better a bitter truth than a sweet lie. I believe you can still fix this. You can make the whole world fall in love with you. For this, God gave you a brilliant culture. If you change for the better, you are capable of earning the sincere trust of the Caucasian peoples. Also, if you take the right steps, you can earn forgiveness from the Abkhazian and Ossetian peoples. The world around you can suddenly change completely. The only thing that is needed from you is to go to the mirror in the morning and, looking at your image, smile. Everything is correct, as in the famous cartoon, familiar to us from childhood.

Do not think that I shall always treat you as at the start or in the middle of this post. Among the Mingrelians, Svans and Georgians, I have relatives, brothers-in-arms, friends and acquaintances whom I cannot help but respect; I cannot but worry about them. In the heat of emotion over the books and articles published by your historians, I could today have forcefully constrained you. I could have pointed out to you many historical sources and testimonies to spoil your mood, but I did not. I wish peace to all peoples of the Earth, including you.

This article was published on David Dasania's personal blog and is translated from Russian.