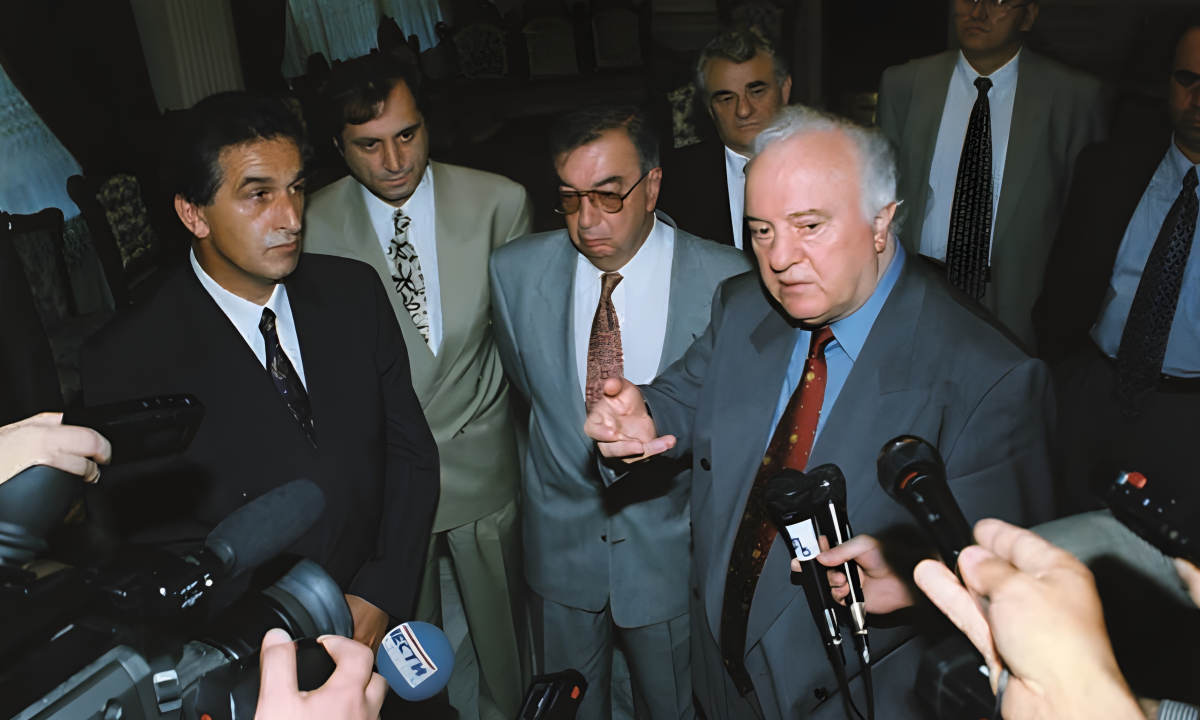 A World Challenged: Fighting Terrorism in the Twenty-First Century, by Yevgeny M. Primakov

In the wake of September 11, more attention must be devoted to resolving the ethnic conflicts that are going on within the territory of the former Soviet Union. Such conflicts are taking an extraordinarily heavy toll on several former Soviet republics. These conflicts are causing problems in the relations of these countries with Russia, and they threaten serious structural damage to the Commonwealth of Independent States (CIS).

The most significant ethnic conflicts currently are the Armenian-Azerbaijani conflict over Nagornyi-Karabakh,[3] the Abkhazian and South Ossetian conflicts in Georgia, and the Trans-Dniestrian conflict in Moldova, all of which have entered their second decade. Each of these started out as an armed confrontation, with actual warfare between the parties. The armed confrontations were brought under control, largely with Russia’s assistance. Yet the conflicts continue to simmer, and the parties find themselves physically separated by barricades. Resolution is also more difficult to achieve because the areas created by the fighting— Nagornyi-Karabakh, Abkhazia, Trans-Dniestria, South Ossetia—have become de facto independent entities, indeed, possessing many of the attributes of statehood.

At the same time, it is clear that the present situation cannot continue forever in these regions. The conflicts are no longer purely political or military; they are taking an increasingly destructive toll demographically, economically, and in international relations. Here are some examples. The regions of Azerbaijan occupied during the war remain unpopulated; a significant portion of the Azerbaijan population consists of refugees. The Armenians who occupied these lands have not settled them, nor will they be able to do so. Moreover, the population of Nagornyi-Karabakh—indeed, of Armenia as a whole—is decreasing. By some accounts only 1.5 million people remain in Armenia, most having left for Russia or farther afield.

The persistent nature of the conflict in Abkhazia is largely responsible for Tbilisi’s moving politically toward the Chechen separatists. Georgia had originally anticipated that Chechen fighters—who had earlier helped the Abkhazians—might now be helpful on the Georgian side of the conflict. Georgia’s use of the Chechen element in the conflict seriously damaged Georgian-Russian relations—a point I have addressed earlier in my remarks on Chechnya.

Tension eased when Georgian special forces went to work in the Pankisi Gorge, taking several rebels into custody and turning them over to the Russian special services. Some saw this as the result of pressure by the United States, which did not want Georgian-Russian relations to boil over.

Although experience shows there is no reason to expect a successful military resolution to the Georgia-Abkhazia conflict, the long years of conflict are pushing some circles in Georgia to try everything but direct military action. For instance, Georgia has frequently insisted on the withdrawal of CIS peacekeeping forces, made up entirely of Russian personnel, from the conflict zone. The Georgians charge that they are not using force to return Georgian refugees to Abkhazia. The arguments that peacekeeping missions must be based on the agreement of both sides regarding their function, and that they differ from missions to “impose peace”—not to mention that peace missions can only be “imposed” with a UN Security Council resolution—fall on deaf ears. At the very last minute, just before the CIS legislative body was to examine the issue of peacekeeping forces in Georgia, Tbilisi extended the force’s mandate to operate. Inflammatory tactics like these play into the hands of those who are holding out for a military solution to the problem of Abkhazia. The peacekeeping forces have been successful at keeping the two sides separated and have prevented perilous military escalation more than once. Another full-scale war between Georgia and Abkhazia would have extremely serious consequences for the region. 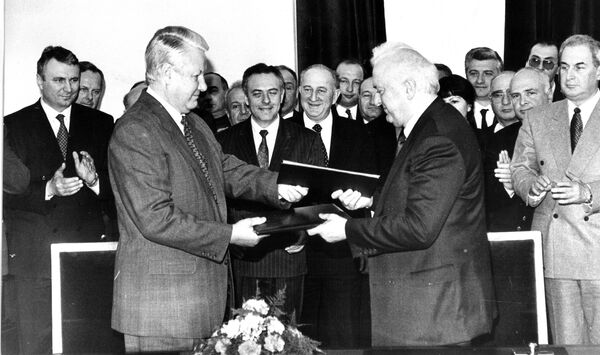 It is likewise dangerous to allow the current level of conflict in South Ossetia to go unchecked. Refugees from South Ossetia are becoming more and more firmly established in North Ossetia–Alania, a constituent republic of the Russian Federation. Those who support this conflict do so in ignorance of the historically cordial relationship between Georgia and Ossetia.

Both Georgia and Moldova are categorically opposed to granting Abkhazia and Trans-Dniestria, respectively, the right to self-determination through secession. Is there any constructive way to work through this impasse? These conflicts do share certain principles with respect to peace overtures that might be made.

First, there is the principle of territorial integrity. As I mentioned at the beginning of this work, reaffirming the principle of territorial integrity is a sine qua non for helping to stabilize the international system and to reinforce the stability of existing states. During my tenure as Russia’s foreign minister, my office worked out a formula that allowed the principle of territorial integrity to be included in a draft agreement between Georgia and Abkhazia. The Foreign Ministry proposed that the sides agree to occupy a common state defined by the borders of the Georgian Soviet Socialist Republic on January 1, 1991 (that is, before the conflict). Based on public opinion among their constituents, the Abkhazian delegation had categorically refused to accept any reference to Georgia’s territorial integrity. Nevertheless, through negotiation, we managed to get them to accept our proposal, which amounted to virtually the same thing. Unfortunately, the Georgians balked at signing and insisted that the agreement provide a single constitution that would govern the entire entity. The Abkhazians found it impossible to agree to this.

Despite its ultimate failure, the idea that the two sides might share living space but not one single unified governmental structure seems to me still to be a viable avenue for future negotiations between the Georgians and the Abkhazians, and between the Georgians and South Ossetians. With respect to the Trans-Dniestrian conflict, this arrangement has already been fixed in a document signed by representatives from Moldova and Trans-Dniestria.

A second principle for any peace process needs to be a firm agreement that brings armed combat to an end. Such an agreement should be elevated to the status of a constitutional article, and it would legally establish equality between the warring sides. This is not to say that the two sides would be equal participants in governing a shared state; it is hard to imagine parity in governance of this sort between, for instance, tiny Abkhazia and the entire rest of Georgia, many times larger and more populous. Nevertheless, the signing of such an agreement could relieve the sides of having to adopt a shared constitution at this early stage. Each side in the conflict would have and be governed by its own constitution, the provisions of which should not contradict the agreement to cease armed combat. In other words, a cease-fire settlement could become the foundation for the longer-term construction of an overarching constitutional arrangement.

My third point is to stress the usefulness of federalism as a means of reaching settlements in both Georgia and Moldova. Georgia historically has been subdivided into many regions that differ little from one another ethnically or religiously, for example, Kakhetia, Imeretia, and Guria. Those who oppose a Georgian federation contend that federalism is an attempt to carve the country up into many small pieces. This is not the case; the components of a federation should be given legal status according to certain criteria that unites their area. For example, Abkhazia, South Ossetia, and Adzharia would all be logical federation subjects.[4] The same could be said for Pridnestrovie and Gagauzia in Moldova. A federal structure could be developed for any state, taking into account the considerable expertise and time such a complicated and delicate task would require.

Those involved with the negotiation process frequently encounter the suggestion that a confederacy is what is needed for areas suffering from these conflicts. Practically speaking, however, true confederacies do not exist in the world today. Although nominally a confederacy, Switzerland, for instance, comprises cantons that cannot be considered to have any appreciable sovereignty within the framework of the state that unites them. But federations will differ from one another to the degree that their component federative subjects enjoy independence and attributes of sovereignty.

In March 2003 in Sochi, after negotiations with President Putin, Georgian president Eduard Shevardnadze announced that Georgia would agree to establish a federal structure within Georgia that would grant Abkhazia special status. Abkhazian representatives downplayed this statement and declined the offer. This initial reaction was to be expected, because Russia had suggested the same formula for peace—with agreement from Abkhazia—several times before (including once in 1996 when I was foreign minister). Tbilisi had rejected the offer each time. As the years passed, Abkhazia grew accustomed to the idea of an independent existence, in spite of the obstacles and challenges. Eventually, however, we can expect the two sides to sit down to the negotiating table to hammer out the details of bringing forth a federal structure for Georgia that will grant special status to Abkhazia. There really is no alternative.

To be sure, the principles outlined above are only a starting point. They and other details must be weighed carefully in any specific situation. The main thing is to focus and get started.

And what of the conflict between Armenia and Azerbaijan? From the beginning, one possibility for reaching peace has involved an exchange of territory. Currently, this alternative has become the focus for the highlevel negotiations the two sides continue to conduct. In addition to determining the status of Nagornyi-Karabakh and ending the occupation of seven regions in Azerbaijan, negotiations are also addressing the possibility of exchanging Armenian territory for the Lachin Corridor, which connects Nagornyi-Karabakh and Armenia. Negotiators are up against substantial obstacles. The Azerbaijani region of Nakhichevan is an enclave, and Baku is pushing for territorial exchange terms that would join the region with the rest of Azerbaijan. The problem is that Armenia’s only border with Iran runs between the two and would be eliminated if they were joined. Erevan wants to retain its direct access to Iran, because the Iranian connection took on great foreign economic significance during Armenia’s crisis. The search for a model acceptable to both sides continues.

Notes:
3. Calling this the “Armenian-Azerbaijani” conflict is in no way intended to downplay the role of Nagorno-Karabakh itself in the origin and rise of this conflict, or in the current peace process.
4. Adzharia was the only Soviet autonomous republic established along religious lines; the Adzhars are ethnically Georgian but practice Islam.