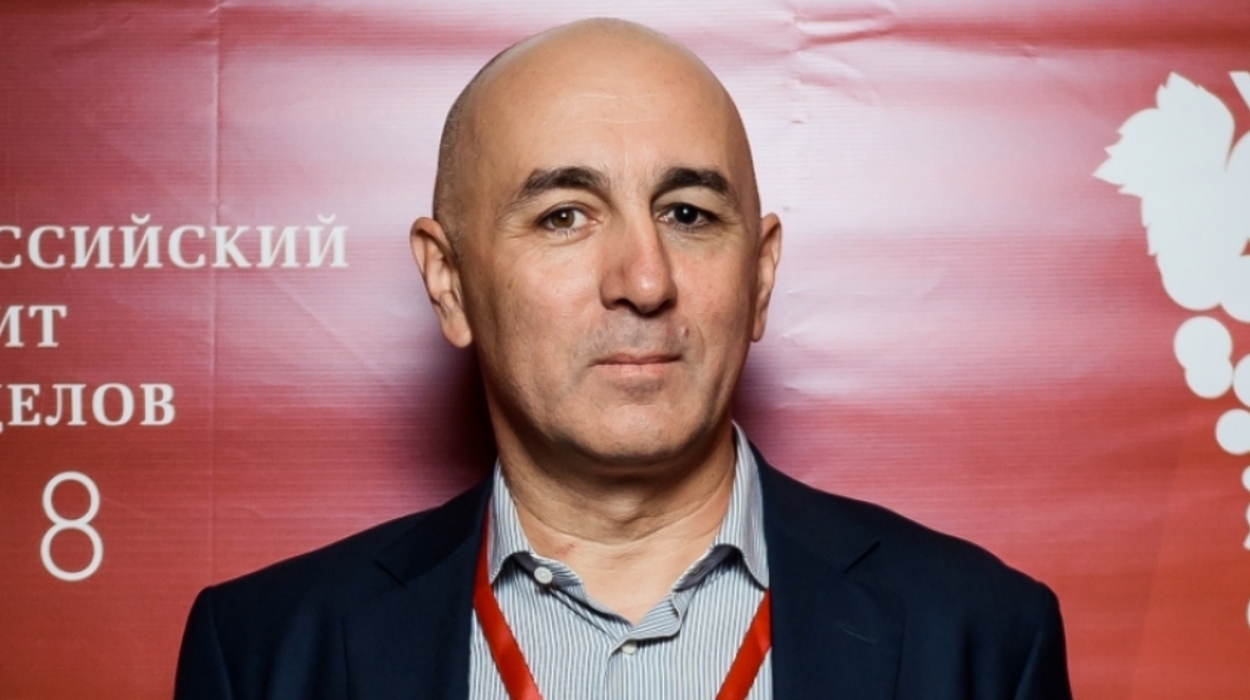 Alkhas Argun, President of the Association of Wine-producers of Abkhazia.

The Ministry of Foreign Affairs of Abkhazia has banned a project of the Food and Agriculture Organisation of the United Nations (FAO) to support autochthonous grape-varieties. It accused the head of this organisation, Tiphaine Lucas, of "espionage-activities" and declared her persona non grata. Foreign Minister Inal Ardzinba said her actions are seen as a direct threat to national security. Alkhas Argun, President of the Association of Wine-producers of Abkhazia, spoke in defence of Tiphaine Lucas. He told Ekho Kavkaza what she was actually doing in Abkhazia and what kind of blow this decision could have on Abkhazian wine-production.

We had very interesting initial results, and now she has been accused of some crazy espionage. It's a witch-hunt.

- I can't call it anything other than nonsense. What intelligence can be garnered here through growing grapes? This programme was designed to revive Abkhazian grape-varieties, and for several years this person sincerely tried to do something useful for Abkhazia. She brought here the world's best grape-growing specialists, she connected us with the leading grape-laboratory, with the largest database. We had very interesting initial results, and now she has been accused of some crazy espionage. This is a witch-hunt. We have found ourselves caught up in the mainstream of Russian hysteria, and we too are probably affected by it. This fight with foreign agents is most likely on its way here.

– The person is accused of a serious crime, of espionage, but not a single argument is presented, except that the project was carried out in the village of Primorskoe (Gudauta Region), in close proximity to the Russian military base. Can you say something about why such a place was chosen?

- Because this is where the Department of Defence’s warehouses used to be before they were blown up a few years ago. You probably remember. And then The Halo Trust was engaged in demining. That is to say, The Halo Trust was clearing mines for two years, and this caused no hindrance to the Russian military base, but for some reason the grapes that were going to be grown there were a hindrance. This suggests the idea that there is a completely different background, I can only suppose…

This is a very serious project, it gave us access to technologies that will not now be available, and Russia too does not have access to them.

- These are some of my assumptions, I cannot provide chapter and verse, because I have no evidence. But this place was chosen, I imagine, because there had already been one project for the rehabilitation of the area, and, probably, it was convenient for them to do the next project on soil that had already been rehabilitated. It was directed towards the peaceful aim of planting a vineyard on the site of a warehouse with shells – and not just a vineyard. This is a very serious project, it gave us access to technologies that will not now be available, and Russia too does not have access to them. Russia itself suffers from a lack of planting material, but in order to understand this, one must take a broader approach. Unfortunately, we don't have that right now.

- What will be the consequences of the termination of this project for Abkhazia?

– We shall be unable to restore our autochthonous grape-varieties. In the 19th century there was such a Russian scientist – Mikhail Ballas, a viticulturist and wine-producer. I read his report to the Tsar. Among other vineyards, he describes the vineyards of the Sukhum District, viz. the territory of Abkhazia. And he lists 53 Abkhazian varieties, describing each variety in terms of what kind of wine is made from it, and in which villages it is common. There are 53 unique varieties that are not found anywhere else in the world. These autochthonous varieties cannot be found in the forest, or dug up and planted at home to grow. This is the result of many years, over decades, and perhaps centuries of selection and cultivation of the desired properties, specifically the cultivation of these varieties. This is an entire culture of wine-production, which is now completely forgotten by us. But it is being actively exploited by our neighbours – the Georgians and Armenians. They compete with each other for supremacy in the world-production of wine-production. There are also archaeological materials that reflect some tools and containers where wine was stored, because bones have been found there. And we too are in this zone and are one of the founders of developments along these lines. Also, there is in Europe a very widespread view that wine-production came from the Caucasus.

We have a history – we had our own varieties capable of producing great world-class wine, but today we do not have them. Why? Because we do not have this grape on an industrial scale, and single plantings do not solve the problem.

– How are these autochthonous varieties related to the work of Tiphaine Lucas?

– We are now talking about these varieties, but do you know of, let’s say, just one wine of our variety? The winery doesn't have it; I don't have it – none of the major wine-producers has it; only single bottles are produced. We have a history; we had our own varieties capable of producing great world-class wine, but today we do not have them. Why? Because we do not have this grape on an industrial scale, and single plantings do not solve the problem. In order to plant a hectare, we need four, five, six thousand seedlings. To grow them, you need scientific work, for you can’t just go and plant them willy-nilly. First you need to study them, examine them so that there are no viruses, make sure that this is exactly the variety that you are interested in, and then begin the process of cultivation.

In Russia for the last fifteen years, wine-production of the modern type has been rapidly developing, but they are also experiencing huge problems with planting material. They were buying it all the time in Europe, because that is where all the technology is. And this project would help us get planting material, which in the future we could sell to the public or the actual wineries, and in general to anyone who wishes. We don't have seedlings right now. I would love to plant several hectares, but there is no planting material, and there is nowhere to get it. There are attempts to take cuttings somewhere and plant them, but we are excluded from Europe. This summer in Russia I placed an order, and we expected to receive thirty thousand seedlings – the Wines and Waters of Abkhazia and I were dealing with this issue, but we will receive only six. None of all this is developed there, and we could have had it here, but spy-mania has prevented it.

– What exactly did Tiphaine Lucas help with?

– We had to learn how to graft and grow seedlings here. The bottom line is to graft a cutting from the right plant to the right root-stock and then grow it. I met her by chance a few years ago, and we nurtured this idea over several years. When it came to implementation, and funding was allocated by European structures in Switzerland, it attracted the best organisations, for example, the Institute of Winemaking in Bordeaux, a laboratory in Montpellier, the Institute of Wine in Switzerland – that is to say, the biggest European leaders were ready to help us and share technologies. Two professors have already visited, one a specialist in soil, the other in wine, and they gave lectures at my place in Qw’lanyrkhwa and at the winery in Lykhny.

I don't even know what to call it; it's not tyranny, but, apparently, there is some specific political business, and they don't care, being ready to go over heads regarding any projects. In my opinion, they don’t give a damn about what will happen in Abkhazia.

We planned the arrival of specialists this month and later to educate our wine-producers and everyone who is involved in this. But, most likely, now all this will stop. And the form in which it was done is just disgusting, I can’t call it anything else! Absolutely without any reason, a person is thrown out of here! A person who has sincerely helped us over several years, attracting specialists here, and she never made any political statements. She also had other projects related, for example, to the revival of our boxwood, which all fell victim to fire, you know. They provided ABNILOS (the Abkhazian Research Forest Experimental Station) with technologies and a laboratory where they will plant boxwood – seedlings have already been planted and are growing there. You can contact the Institute of Botany, they cooperated with them. There we now have a base for the restoration of boxwood. They were also engaged in the treatment of chestnut, which is diseased everywhere here, our chestnut-forests have almost disappeared. This is a serious problem, and they have tried to sort it out.

Everyone at the Institute of Ecology and the Institute of Botany knows her very well, because they worked with her. But we had to work in wine-production, because this particular industry is close to her. She grew up in Chablis, this is to say Burgundy, in a family of wine-producers, and so she has been involved in grapes since childhood. This topic turned out to be close to her, and she sincerely wanted to help us. She wrote the whole project herself, and it was going well. The sponsors believed in her, and they also believed in us, for they wouldn’t just hand out money for the project without there being good reasons. Well, there you have it, but as for our lot – I don't even know what to call it; it's not tyranny, but, apparently, there is some specific political business, and they don't care, being ready to go over heads regarding any projects. In my opinion, they don’t give a damn about what will happen in Abkhazia.