Before the Revolution the initiative of the people was rather limited as the servants of the previous regime used to “perform” everything themselves.  The Revolution established the equal rights and opportunities for all public-political and national groups in self-determination and protection of their own interests.

In addition to the administrative organs, the trade unions and political organizations were established everywhere, as well as the Soviets of Workers and Soldiers Deputies. These Unions and organizations, supporting the achievements of the Revolution, at the same time protect the rights and interests of classes and masses headed by them.

Evidently, the Revolution put forward the motto on self-determination of the nations oppressed by the Tsar regime.  This slogan was grasped by the interested masses and they started its swift implementation at many places (Ukraine, Finland).

The Abkhaz people, likewise the other peoples of the Republic of Russia, comprehend the Revolution first of all as the free determination of nations.

Taking into account all the aforementioned, the Congress of the Abkhaz People firmly declares that centuries-old Abkhazia, which has a great experience in state-building, shall have the political organization capable to unite the Abkhaz people and demonstrate the will of the majority protecting their interests.

The Abkhaz People’s Council will be such organization.

The tasks of the Abkhaz People’s Council shall be as follows:

1. First and foremost – to protect and strengthen the achievements of the Revolution and political education and organization of masses.

Abkhaz people understand that all freedoms, including the freedom of Abkhazia depends on the Revolution.

Multiple eruption of anarchy in entire country indicates that the people shall firmly stand for freedom and Revolution as some of the threats haven’t been removed yet.

At the same time the masses, like it is in Russia, thanks to the felonious policy of the overthrown regime found them not very well prepared and organized and these masses can serve as a foundation to the Revolution if they represent a single-whole, which is organized and conscious.

II. The shall also protect the national, cultural-economic and political rights of the Abkhaz people from any encroachment, no matter where they are coming from.

In this challenging time, when many of old structures is being destroyed and the new ones are being built, when the life condition and environment in Russia are changing drastically, as well as in Abkhazia, every nation shall observe their rights and interests protecting them from infringement in the new arrangement of Russia.  The Abkhaz people believe that their brothers, the mountain people of the Caucasus and Daghestan will support them to safeguard their rights.

III. Self-determination is one of the most important priorities of the People’s Council of Abkhazia.

At the same time we have to remember that there will not be a slow implementation of the right to self-determination; in fact it will be the preparation to the self-determination and the final forms of it are being elaborated at the Al-Russian Constituent Assembly.

This preparation means that after collecting the materials and expressing the people’s will, the project of arrangements of different issues of Abkhazia shall be elaborated.

At the same time the  Abkhaz People’s Council shall assume the prompt resolution of the issues that are relating to the self-determination and need immediate attention (school issues and others).

IV. The Abkhaz people is the part of the Union of the North Caucasus Mountain People, Daghestan and Abkhazia, and, evidently it needs to establish very close contacts with its northern brothers.

The  Abkhaz People’s Council will be a body, which will unite the Abkhaz people with the Union of Mountain People through the Central Committee of the Union. 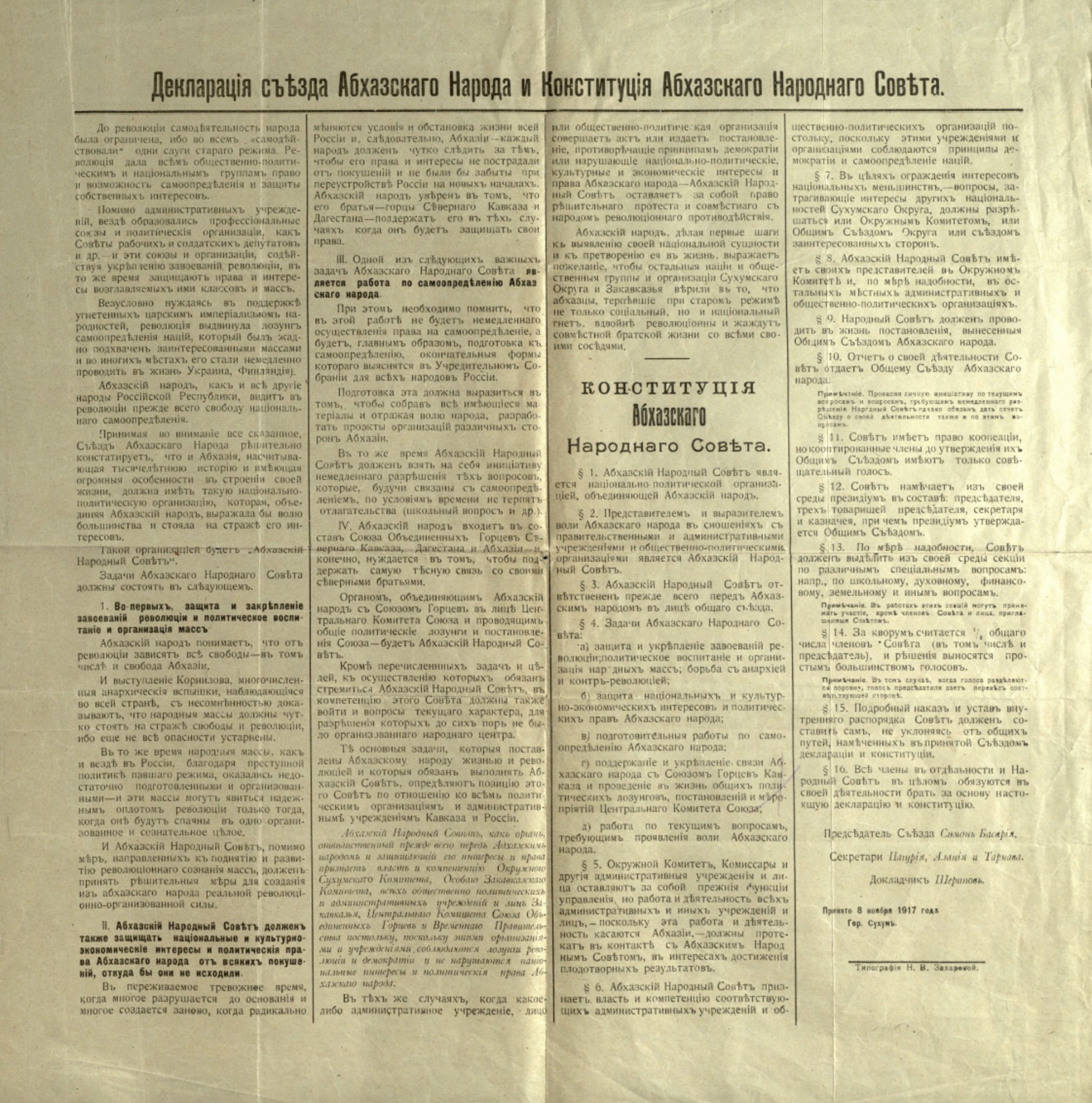 Besides the listed objectives and goals the Abkhaz people shall strive for, this Council also is to cover the current issues, as so far there is no organized public center.

The major tasks, raised by the Revolution before the Abkhaz people gives a shape to the position of this Council toward all political organizations and administrative agencies of the Caucasus and Russia.

The People’s Council of Abkhazia, which is first of all accountable to the Abkhaz people and protects their interests and rights, recognizes the power and competence of the Sukhumi Okrug Committee, as well as of the Trans-Caucasus Committee, all public-political and administrative agencies and the members of the Central Committee of the Union of Mountain Peoples and of the Provisional Government as  these organizations and agencies observe the mottoes of the Revolution, and of democracy without prejudice to the national interests and to the political rights of the Abkhaz People.

In case of violation of the national-political, cultural and economic interests or the rights of Abkhaz people, or if some legal acts or resolutions issued by the administrative organ or public official run counter the rights of the Abkhaz people – the  Abkhaz People’s Councilreserves the right to express the decisive protest and resort the revolutionary resistance together with the people.

The Abkhaz people, making the first steps on the way of national identification, would like the other nations and public groups and organizations of Sukhumi Okrug and Trans-Caucasus to believe that the Abkhazs, being the subject not only of the social, but also of the national oppression under the previous regime, are very much dedicated to the revolution and strive for fraternal coexistence with all of the neighbors.